Pinterest is showing how many times your pins have been re-pinned. You can’t seem to do it all the time (although I could be wrong as technology is not my strong suit). So when I was browsing late last night and Pinterest suddenly went all wonky (see my mastery of highly technical terms) and half my pins disappeared (small exaggeration), I had a moment of panic. Followed by relief when they appeared again and a small thrill when I saw that the pin counter was back. Am I wrong to like seeing which of my own efforts have been re-pinned? Which ones are hits, and which are rejects? Am I like Narcissus, staring into the pool of Pinterest?

Aw, who cares?! I quickly looked to see how many times some of my favourite cards had been pinned on by others. Quickly, in case the opportunity was gone in the morning. Furtively too, bizarrely. Did I think it might be some hidden camera show? So, some were pinned a hundred, two hundred times. I was feeling pretty good: it’s nice to think that people like something you have made. We all doubt ourselves, and are our own most critical of critics, so a bit of positive affirmation is no bad thing. It still felt like I was doing something rather naughty though.

Then I got to this one. Re-pinned 575 times. Almost lost consciousness. Probably did a couple of double-takes and some ‘oh my god I can’t believe it’ eyeball rubbing too. 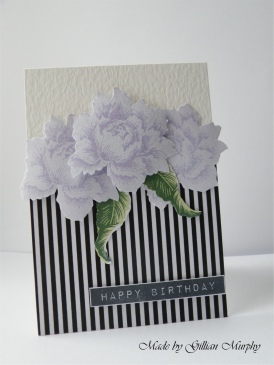 Of course I know it’s not a brilliant card. And that the re-pinning will be due to everyone loving Altenew stamps at the moment. And that for some people 575 pins would be a flop. But even so, to me, it feels pretty darn good. It took a (really) long time to pluck up the courage to pin my own cards, and even longer to start doing this blog.  I would just say to anyone who is likewise reluctant, try it. It’s fun, it really is!