Today I have been communing with nature. Well actually I have been doing some gardening for my mother. I am not designed for gardening on warm days. After about 5 minutes in the sun I fry better than bacon. It’s not surprising really, it’s in the genes, can‘t fight it. My grandfather got sunstroke. In Ireland. In March. Really.

So, mum’s garden looks tidier, and I look a mess. A living illustration of Newton’s law in glorious technicolour. Well, lobster pink, anyway. I am back to work tomorrow (booo) after a lovely week off and still have a million things to do, but I also want to make something, because I am trying to make something daily, but it will have to be something quick. That’s a lot of somethings and a lot of making!

No time for dawdling, decisions will have to be snappy. Yesterday I found (yep, looking for something else again) an ancient Martha Stewart set of stamps that actually look quite current. I also have a half-finished stamped background. Half finished because it is just plain stripes, completely adorable, nightmare to stamp. I have tried it many times and just get a patchy image each time. I’m not giving up on it though, I just might need to go trawl the internet for tips on how to get a good result. I’ve tried dye and pigment, putting the card on top, underneath, even made up my own sandwich and tried running it through the die cutter but no luck. Not to be defeated in the meantime, in idle moments I have been painstakingly masking off each stripe and inking them again individually to get that dark, dark shade I want. Nuts, I know, but I don’t care! Two stripes left, won’t take long.

I used Altenew ink on the flower and sentiment, fussy cut the flower, trimmed it all up a bit. Something glittery was required – I remembered some sticky tape I found in a supermarket stationery section. Now I wish I had bought more! 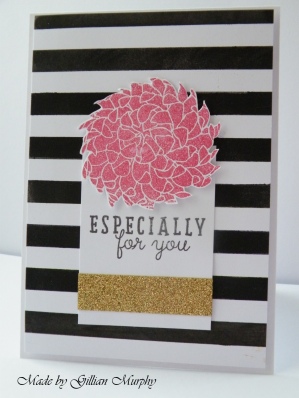 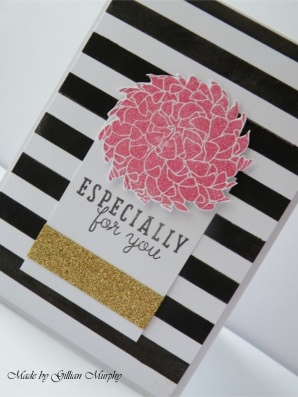 For what was more or less a rush job I am pretty pleased with it.

Hope everyone enjoyed the sun today and if you have any suggestions on how to make my stamp work better I’d love to hear them.

P.S – I should have said the stamp is 15cm square, red rubber on cushioned mount. It is not on a wooden base xx

6 thoughts on “Lobster, anyone?”