Because (a) I have done something, for me, vaguely clever with Serif CraftArtist

So (a) then. I have mentioned before how I don’t use my CraftArtist software to anything like its potential. I basically print and then hybrid craft. But, eyeing up my Altenew stamp collection I knew I wanted a black dotty background for the yellow roses I intended to make, but smaller than the spots in my beloved polka dot stamp.

My poor wee Brain told me it must be possible to make my own background digitally, but I had not much clue how. Again, my fault, I should invest some time in learning, which so far I have failed to do. Still, nothing like a deadline (bedtime) to sharpen the mind. I won’t bore you with the details of how I accidentally majestically managed it, but look, I have a random dotty background! Ok it is not perfect, but Rome wasn’t built in a day, apparently. Well of course it wasn’t built in a day. Only the three little piggies managed major real estate construction in a day and clearly that was not a model for success.

Aaaanyway. (b) then. It’s a small tip, but it might be handy. I wanted to stamp one of the roses from my Altenew Vintage Flowers, which is a three layer stamp, in yellows, but I don’t have their range of yellow inks, or any other three yellow-through-orange inks that would go together. I tested some combinations, but they were not pretty. I do though have the Four Scoops set, which has a yellow and a peach that work with each other. I stamped just two layers and actually it would have been perfectly fine, but as I don’t venture into ‘yellow territory’ often I kind of wanted to embrace it totally. Like wallowing a bath full of custard. No point in just sticking a foot in, right?

Quick mental check – apparently Brain is still in the building and happy to be called upon. Hurrah! ‘Try a water-based marker pen’ it suggested. Quite a specific instruction, really. ‘You have loads. You never made proper use of them’. Ok. I get the message. Now Brain is starting to sound like a nagging other half and as far as I am concerned it can bog off until it can be civil again. I am away, a now brainless woman on a vital mission. A pale yellow marker pen is retrieved, stamped over the Altenew inks, works fine, love it, job done. 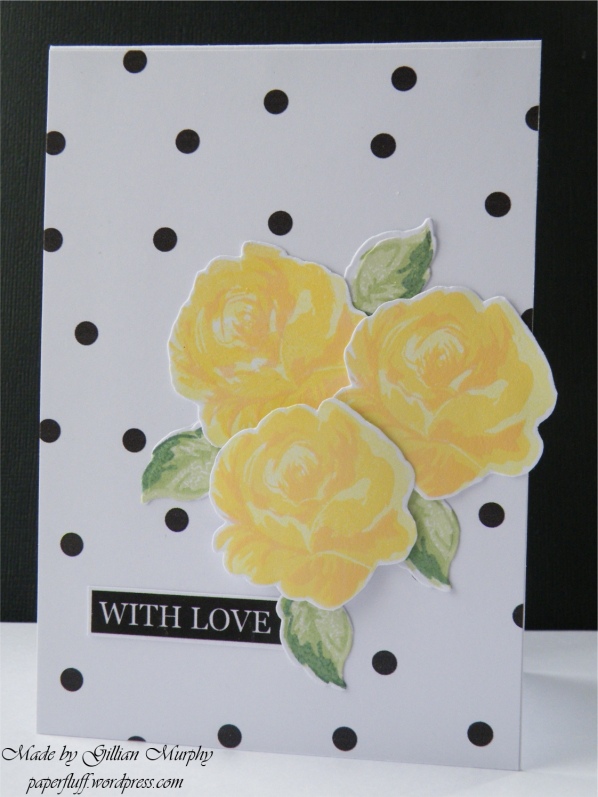 I cannot find my Label Love stamps anywhere, so again I used CraftArtist and made my own sentiment. No fear!

17 thoughts on “Please, nobody faint…”