Because not all cards for men have to be navy or brown….

I have to confess to a crime against craft. This week, whilst once again braving Stash Mountain, I came across a couple of sets of dies I had never used. Actually I have quite a few sets like that, but these ones I had also forgotten about. Tsk! I believe I may have mentioned this before, but the rule is, in order not to further upset the Gods of Craft, once such items are discovered, you gotta make something.

These are simple silhouette dies, all of a sporting ilk. I seem to remember they were a bargain, hence the purchase. Also we have quite a few ‘young men’ (translate as ‘significantly younger than us‘) in our family and I am just never prepared with cards to give them. A bit rubbish really, considering how much kit I have to hand. But stuff for younger people seems to date so fast. The ‘technology’ that was a feature of card toppers I bought, say, five years ago now probably looks to them like it might have been used to steer a tall ship in the 1800s. But hey, a shadow remains constant. Well, no, not at all really, always changing in fact…but last time I checked we all still had one…unless you live in Britain, with no sunshine…and I think there was an issue with Peter Pan…heck this is not going well at all…

Ahem. Let’s get this back on track. Anyone want to see a card? I decided to go bright, and bright-ish for these. Why not? Colour is fun and silhouettes lend themselves to a splosh of the primaries.

For the first card I used the basketball player and three different splat stamps in the primary colours. I was OK with it but though it just needed a little more, so stencilled some grey spots at the top for a bit more interest. I also stamped splats onto the envelope and one behind the greeting on the inside. In the photos the red looks a bit pinkish. It isn’t though! 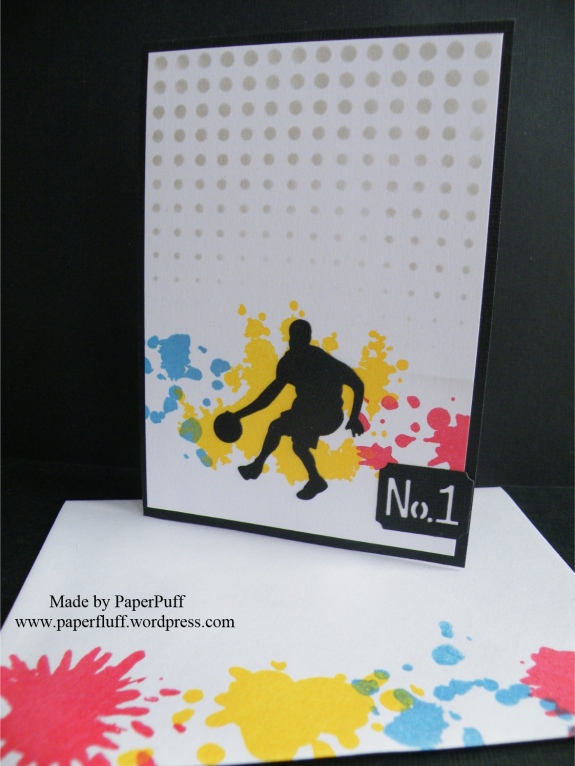 For the second I was considering doing pretty much the same, but in slightly softer tones and with a footballer (soccer player, to my North American pals). But recently I have seen a few examples of cards with a partial circle cut out at the edge and thought this might be fun for a change. Because the black layer looked a little austere just left plain I also used my Halftone stencil, this time with embossing ink (Versamark) and clear embossing powder. This gives it a bit of texture without (hopefully) being too girlie. Again I decorated the envelope a bit. Well, why not? 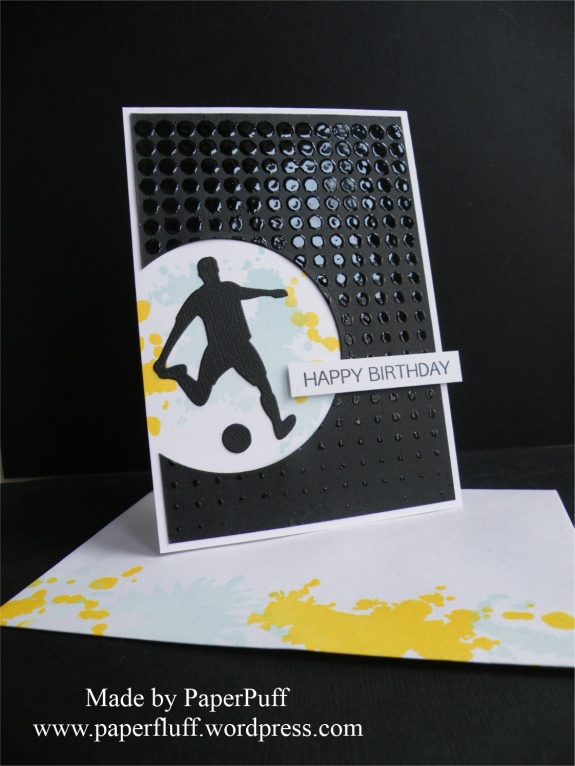 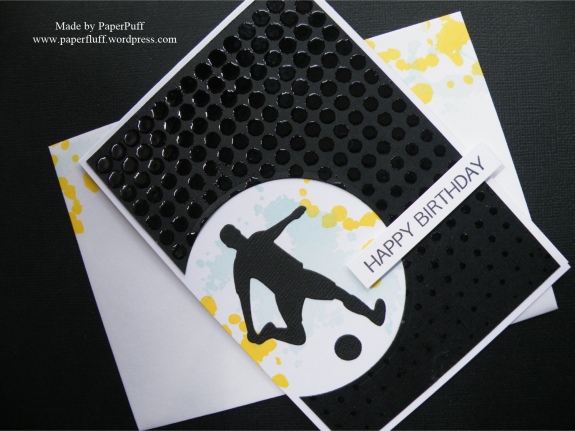 I still have tennis, rugby and golfer dies to play with! I will probably make at least one blue or brown card. Ah well.

90 thoughts on “Colourful cards for men”