This morning, as usual before work the TV is switched on for BBC Breakfast news. I’d like to say it is so I can keep abreast of current affairs, sharpen my intellect and develop informed opinions on all the topics of the day. And of course (!) it is but it is also in case there are any road works, failed traffic lights (or phantom bus stops) that will affect my journey.  So, telly on, jump under the shower and….what the ‘bleep’ is that noise? TV volume is up to the maximum and now people three houses along can save electricity by turning off their TV and listen to mind instead.

I guess maybe the cat must have jumped/sat on the remote? But I’m not sure, and he is giving nothing away, sitting across the room and washing lazily. I remedy the situation, have a quick chuckle, scratch cat fondly on the head and get on. Local news coming up. Great. Except instead of a London accent the presenter clearly comes from Northern Ireland, and I am being told about bomb-making equipment being found near Larne. I am pretty sure Larne is nowhere around here. It sounds far too pretty. “Tee hee,” I think, “the BBC have made a mistake and everyone in the UK (or at least the South East) is getting the wrong local news!!” It switches back to the main presenters and nothing is said. THEY DON’T EVEN KNOW I think. Another chuckle.

30 minutes later the next local news bulletin is due. They announce it “now for the news where you are this morning” or something like that. But I appear to be transported, Dorothy-like, back to Northern Ireland again!  Shoddy workmanship by the BBC, I am thinking. Once, forgivable, but twice would get a ‘must try harder’ on their report.

Then, and only then, does my poor wee brain go, “hold on, wait just a second…did Riley (the cat) interfere with (sit on) more than one remote??”  Grab cable TV zapper, punch in the usual BBC One number and voila, I am back in South London. How did he do that??

Note to self: get caffeine inside you before all else. Otherwise you are an idiot!

So here, fittingly for today, we have a bird house, for my bird brain. I made this some time ago, and so as to  be honest and fair I need to say I think it was pretty much copied from an example or demo by the suppliers Crafter’s Companion. But sometimes if you are thinking about buying a product it is nice to see if it really works for us mortals! 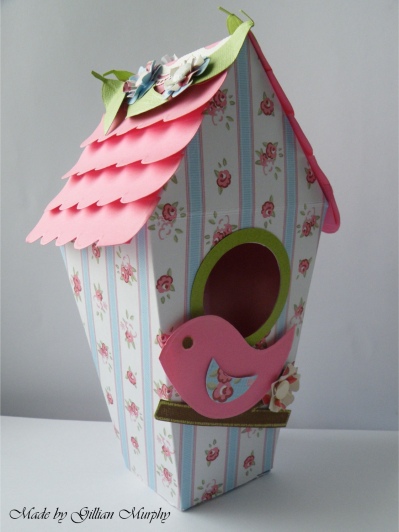 This is from the Sweet Treats range and it was the first one I made. I used the embossing board and the accompanying CD for the flowery paper. Everything else was just scraps or stash. It does take a little while to do if you want to make the whole ’tiled’ roof effect but if you are in a hurry you could leave that out or maybe use dies cut strips to achieve the effect. I definitely wanted colour inside the box – it makes a massive difference to the end result. I know this because I printed one side only, got it all cut out, had a trial run holding it together and you could see that it lacked a bit of definition. So, print both sides of your card or do as I did and cut panels to glue inside. I really enjoyed making this box and they do have a bit of a wow factor!