One of my lovely aunts has got married. So, some paper craft was called for and I had a chance to rustle up a little something. Well, two little somethings, actually. I felt rather out of practice, to be honest, using paper and card again after a bit of a break. Inspiration was somewhat tricky, and I had a few epic fails, but overall I am happy with what I have made in the time I had.

It is a second marriage, so I didn’t want to use any bridal dress imagery, but any wedding is a happy event so a few bells and whistles are not out of place, right? So, and hearts and pearls for nuptials. 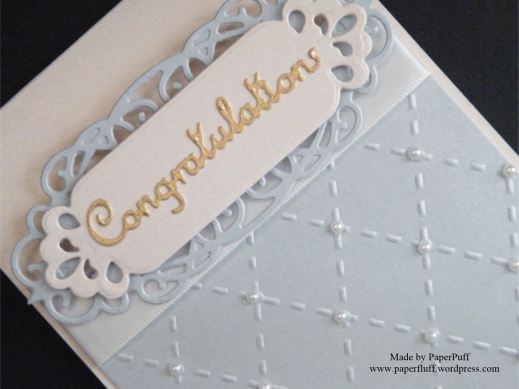 My one and only experience as a bridesmaid was at this aunt’s first wedding, back in the 1970s. Being the youngest sister in her family, unfortunately Auntie C had little choice but to select all of her elder sisters’ female offspring as bridesmaids. All five of us, ranging from about aged 10, to aged 2 or 3. She had my sympathy, even then. My sister, as a the eldest, was head wrangler chief bridesmaid. Not an easy job, and she was possibly suffering from PBSD (Post Bridesmaid Stress Disorder) anyway, as she had filled the role once before, years earlier, for another aunt, and lost her headdress down the toilet….

We were so excited about being bridesmaids. I think that is why Auntie C couldn’t refuse any of us the chance. I don’t suppose she really relished it, but bless her, she never let on. I do remember a LOT of talks about being on best behaviour from every other adult that knew us though.

So, in Britain in the 1970s, or at least in our corner of it, weddings were rather different to now. Rather more low key; a ceremony and a bit of a house party with family and friends rather than the larger affairs that take place in the 21st century. I can’t help but think that the 1970s version had something going for it. Everyone chipped in, got involved. And although obviously it cost money, it could not have been anything like the frankly astonishing amount that the average wedding costs today. Plus, less pressure for the ‘perfect day’ to remember. A church, a frock, some photos, a party, super.

Actually it is probably good that ‘perfect’ was not expected.

Back to the delirious bridesmaids. Our dresses were handmade by, I think, my mum and her other sister Auntie B (mother of the other three bridesmaids). They were yellow, broderie anglaise, lined (for extra swishiness, I assumed, probably modesty and a touch of luxury, in reality), with peter pan collars and puff sleeves. We were all pretty much in love with the frock. Then shoes. Ballet shoes. Some cups of happiness ran over.

Now, here is where it could have ended. But, for a reason which has never been explained to my satisfaction, headgear was apparently also required. Perhaps it was the fashion, I don’t know. I was a kid. But if I had known the acronym ‘WTH (polite version) were you thinking?’ well it would have been extremely apposite right then.

We had yellow bonnets, made from scratchy net, like you would use for a tutu. When I say bonnet, think of those thingies that Cosmonauts wear under their helmets. So really, a skull cap, covering the whole head. And wreathed all over in several big, big, big fake white and yellow flowers. Kind of like a swimming cap from an old Esther Williams movie, but feeling more like a pan scourer. Then, it was fastened with a mahoosive bow, under the chin. Maybe my sister’s previous experience was being considered. Lash it to them, so they can’t lose it.

As if this wasn’t enough, I was also the object of scientific experimentation. My hair was permed. Apparently, it was because it was ‘so fine’ (as in thickness, not as in splendour). But then it was covered up with an enormous floral ritual offering, so why bother?! I don’t think Social Services would allow it these days…

So, the wedding day. We were of a generation that was taught to behave in public, do what you were told, drilled, even, by the adults who wanted the ceremony to go well. In a Catholic Church in the 1970s, there was precious little informality. Impeccable behaviour was expected, and, generally, delivered. Any deviation, signs of boredom or outright naughtiness was NOT good and you would be left in little doubt that you had let the side down. But the youngest bridesmaid was 3. Good luck folks! As I said earlier, this is from the perspective of a kid. I was both mortified by what happened, as the Bridesmaid Etiquette had gotten massively trampled upon, and yet couldn’t help thinking ‘well, what did you expect…’

I only recall what happened in the church. There was probably more. Perhaps I have just blocked it out with my own PBSD. The 3 year old cousin, we will call her D, was really not keen on the job. She was cross that she had different footwear to the rest of us. Apparently ballet shoes were not available in her size so she got snazzy new white proper shoes. Fair enough, she wanted to be like everyone else. But you know, deal with it, right? We are all standing here getting net rash, but doin’ it for Auntie C.

There was some kerfuffle as we prepared to parade down the aisle. D could not understand why she had to go last in the cloud of lemony scratchy flowery bridesmaids. She wanted to be front and centre. Some rank was pulled. Maybe some hair too? I don’t know. But she ended up back at the back, and grouchy as hell.

So, we have made it safely down the aisle, despite being hamstrung by the slightly blinkering effect of the stiff bonnets and blooms and the chafing of the double fisherman‘s knot they had been secured with. The couple are at the altar, bridesmaids assembled in arrow formation 2,2,1 – oldest to youngest – behind. Some solemn words are being said by the priest, and four of us are doing our best to look angelic and attentive. The fifth, Cousin D, has had enough. She stomps to the front and started fussing at the bride’s gown. The Chief Wrangler lived up to her title and executed a stealth manoeuvre. Order was restored, briefly. Then cousin D changed tactics, and started counting the holes in my sister’s broderie anglaise dress. Loudly. And poking each hole, vigorously. Enough to bruise. So the congregation is treated to “ONE! (ouch) TWO! (aargh) FIVE! (oooh) EIGHT!” (whoa).  ‘Bless the person that taught her numbers‘, I am sure the adults were thinking. Then, cousin D again, with slightly less confidence “NINE! NINE! NINE! TWO-TY TEN!” Okaaaay. Some querulous looks between the bridesmaids, hushed instructions and a snatch and bundle operation. Back to positions, pretend that everything is fine. Nobody noticed, right?

A bit more of the wedding service went on. Don’t ask me what. Cousin D decided it was a dull affair. She wandered in the direction of our grandmother (mother of the bride) and threw her bridesmaid’s posy at her, and hollered “here, you hold this, I have had E-NOUGH”. Yeah, the work of a 3 year old is truly hard… She spent the rest of the service pinioned to the front pew, humming as only a toddler can. Namely a selection of nursery rhymes mashed up with a smattering of her own interesting compositions, with gusto.

The photos were a bit hit and miss. Some had four bridesmaids, some five. I expect remonstrations and toilet breaks were the cause. Then the party, afterwards, in my grandparents’ house. A real meeting of an older generation and my aunt’s super cool friends, who were so lovely to the bonneted scratchy ones, now blessedly bonnetless and craving the calm of calamine lotion.

Anyway, Auntie C is married again. I know she will be happy, and had a lovely day, but she didn’t ask us to bridesmaid this time….. 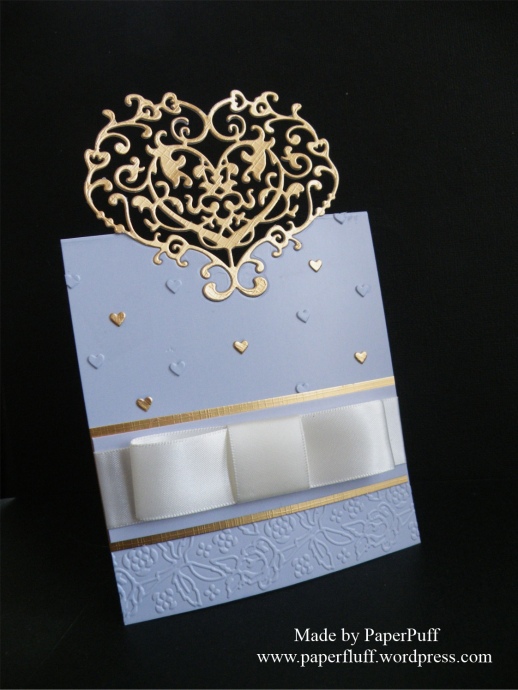 Supplies list – I used so many individual items! If anyone wants to know what something is, or how I made these, drop a line in a comment and I will get back to you.